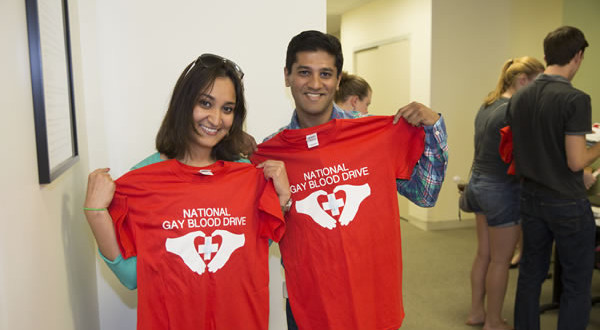 At least 16 gay or bisexual men showed up with a straight or lesbian ally on Friday at the Red Cross blood donation center in D.C. as part of a 60-city National Gay Blood Drive.

Organizers of the nationwide event, led by filmmaker and activist Ryan James Yezak, billed the blood drive as a protest against a U.S. Food & Drug Administration policy that prohibits men who have had sex with other men from donating blood.

Organizers in D.C. and other cities said the protest was aimed at drawing attention to the blood donation ban while serving as an actual blood drive in which straight or lesbian allies were donating blood in place of their gay male or bi male friends.

“At the end of the day they’re collecting blood from eligible donors, which is the most important thing because it’s saving lives,” said Jay Franzone, a spokesperson for the National Gay Blood Drive.

Yezak said in a statement that he initiated the idea of a gay blood drive last year to draw attention to what he believes to be a form of discrimination while promoting the importance of donating blood.

“Eligible allies can donate in place of the gay or bisexual men who cannot so that we not only raise awareness about the ban but also help contribute to the more than 41,000 blood donations needed every day,” Yezak said in a statement.

“We want the FDA to see how our community can benefit the nation’s blood supply, but also see how much we can contribute even when we are banned,” he said.

National SGL rights organizations have long called on the FDA to change its policy to focus on risky behaviors of a potential donor rather than permanently banning every male who has had sex with another male at some point in his life.

“The policy is outdated, and as a result, otherwise eligible gay and bisexual men are unable to contribute to the nation’s blood supply and help save lives,” said Yezak, who has produced a documentary film about the FDA ban on gay and bi male donors.

“In addition, the ban perpetuates inaccurate stereotypes and negative stigma about the gay male population,” he said. “The current lifetime deferral focuses on sexual orientation, and we are calling on the FDA to change its policy so that it instead focuses on sexual behavior and individual risk.”

Laura Marler, one of the organizers of the event at D.C.’s American Red Cross donation center at 2025 E Street, N.W., said Red Cross officials gave their full “support and cooperation” of the event, welcoming donors as they arrived on Friday with their gay male or bi friends.

A Red Cross official at the D.C. blood donation center released a statement to the media on Friday saying the Red Cross and other blood centers are bound by the FDA policy.

According to the statement, the American Red Cross two other organizations – Advancing Transfusion and Cellular therapies Worldwide and America’s Blood Centers – “believe the current lifetime deferral for men who have had sex with other men should be modified and that donor deferral criteria should be made comparable with criteria for other behaviors that pose an increased risk for transmission of transfusion-transmitted infections.”

FDA spokesperson Jennifer Rodriguez told the Blade in an email that the safety of the U.S. blood supplies must remain one of the FDA’s highest priorities. She said the FDA expects licensed blood establishments to follow current regulations and guidance regarding donor eligibility.

“With that said, FDA remains willing to consider new approaches to donor screening and testing,” Rodriguez said. “If those approaches can assure that blood recipients are not placed at an increased risk of HIV or other transfusion transmitted diseases, FDA will consider a change to its current policy.”

Among those participating was Amy Loudermilk, deputy director of D.C. Mayor Vincent Gray’s Office of GLBT Affairs, who donated blood in place of Sterling Washington, the GLBT Affairs Office’s director.

“We heard about it last night,” Loudermilk told the Blade shortly after arriving with Washington at the Red Cross building. “I sent around an email to my D.C. government colleagues and everybody thought it was a wonderful opportunity to participate in this event,” she said.

Added Loudermilk, “What this does is bring more awareness to the fact that a lot of people don’t know – that gay and bisexual men are prohibited from donating blood.”

Washington said that as the son of a man who donated large quantities of blood, he’s especially troubled that he is unable to follow in his father’s footsteps.

“As someone whose father donated over 120 pints in his lifetime it’s in my DNA, if you will, to donate blood. But I can’t because of my sexual orientation, which is unfair – not just to me but to the people who need blood,” he said