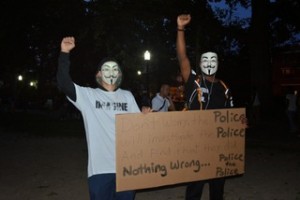 “Chant down Babylon, grassroots is the bomb, we ready, we coming!” Jonathan Lykes, a coordinating council member with the Washington D.C. Black Youth Project, told hundreds of people gathered Aug. 14 at Meridian Hill Park. The phrase, coined by reggae artists, echoed throughout the crowd as a proactive work in progress.
Lykes was the man who got things started. His enthusiasm, chants and energy kept the crowd pumped. “You don’t need an organization to organize. This is not a onetime thing. This is the time to get things done. Our lives are worth saving. We’re here to make a declaration,” he said.
“We are here to revere so many we have lost. Today is a time to mourn.”

An assortment of signs colored the audience at the D.C. rally for Michael Brown.
During the rally, a moment of silence was observed for Michael Brown and others who died from police brutality. During the moment of silence, some crowd members yelled out for the fallen and others expressed their opinions, but organizers and some in the crowd encouraged those who interrupted to show respect and consideration.
An assortment of signs colored the audience. A large American flag was held up with photos of Michael Brown and the slogans “Don’t Shoot;” “Film The Police;” “No Justice, No Peace,” and “Black Lives Matter.” Red peace ribbons were distributed and white dressings were tied around the upp
er arms of organizers.

Hundreds of people gathered Aug. 14 at Meridian Hill Park.
Andy Iker and Joey Maghan, District transplants from West Virginia, heard about the rally at the last minute and decided to come. “I think the police should serve and protect,” said Iker, while Maghan commented, “Police have too much power and give too much force without checking their office.