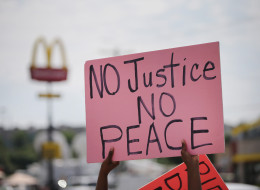 This small St. Louis suburb has been transformed over the past two weeks. Hundreds of people turn out every night to march up and down West Florissant Avenue demanding justice, accountability and a voice in the decisions made on their behalf. Businesses have been closing early just to avoid any potential trouble once the sun goes down, and the city government is having to come up with answers for why it looks so unlike the majority of the people in its community.

A daily routine has started to develop in which residents come over after work and join the protests. Many go home before the sun sets, but others stay out until there is a confrontation with the police and officers clear the street — and inevitably make arrests. Then the next morning, volunteers in the area show up early and clean the debris from the night before. Then, the pattern repeats.

The past few nights have been calm. It seemed that the protests were moving away from violence, and there was talk among the participants about what they want when Ferguson goes back to normal — or hopefully, a new normal, one in which the African-American majority in this city has representation in the city government and police force, both of which currently are overwhelmingly white.

In other words, they’re hoping something more will come out of Michael Brown’s death at the hands of officer Darren Wilson.

The city of Ferguson has already taken some promising steps, putting out a statement Tuesday calling for an end to the nightly protests and pledging measures to make the community “feel more connected,” including more transparency in police operations, an effort to increase the number of black police officers and a promise to engage young people in the city with better resources and more jobs.

In recent days, police have dramatically scaled back their presence at the protests. The hulking military-style vehicles are still there, but they are positioned at the back of parking lots. Police have more often started to venture out onto the streets without wearing bulletproof vests. And when several hundred protesters chanted from across the street toward the Ferguson police headquarters on Friday night, there was only a thin blue line of about 15 officers, with sidearms instead of rifles, staring back.

But there’s still deep skepticism, in large part because Wilson has not yet been charged with a crime in the death of Brown, an unarmed African-American teenager who was shot just blocks from where the protests are happening.

Many protesters who have spoken with The Huffington Post over the last week said that some immediate justice for Brown’s killing would go a long way.

“I think the one thing that can happen that may act to de-escalate this is the arrest of Darren Wilson and an indictment,” said St. Louis Alderman Antonio French, who has been a constant presence at the protests. “If these guys know that justice is being done, and if we can help restore their faith that justice will be served for Michael Brown and his family, then we have a chance to get them to calm down.”

On Thursday night, French predicted protests for “quite a while,” but said he believes the violence had ended. However, he added, if the grand jury decides not to indict the officer who killed Brown, “I worry about our city. And other cities too, frankly.”

“The long-term solution is healing,” Captain Ron Johnson of the Missouri Highway Patrol said in response to a question from HuffPost during one night of protesting. “We can walk these streets again and remember that we’ve made some changes here that have impacted this nation.”

“We could just say Brown was the final straw; it was the straw that broke the camel’s back,” said Victoria Donaldson, 26, of St. Louis. “So until they fix that problem where young black men are being shot down or killed — not even young black men, just black men in general — are being completely disrespected and being treated like animals till the point of death, until that changes it will continue to be something that just upsets us.”

Donaldson’s father was a police officer — but never one who was violent or aggressive, she said — and that has given her a unique perspective on the situation.

“He was the one who basically taught us how to, you know, act … how to portray ourselves in any circumstance,” Donaldson said. She was interrupted by a police officer on a loudspeaker ordering people to get out of the street, because they would get hit by a car “and that will hurt.” Donaldson finished her point.

“He basically just taught us to be very short and reserved, and very, extremely polite,” Donaldson said. “Extreme politeness. Brown-nosing, basically, in my eyes. That’s how it’s been, that’s how most people of color have to deal with the police, because we always have to be on edge that we could be pulled over for speeding or for having a tail light that’s out and end up getting arrested for something that’s far more extreme.”

The Rev. Andrea Alexander, who is originally from St. Louis but now lives just outside of Philadelphia, came back to the area to officiate her niece’s wedding, and decided to make her way to the protests.

“I think maybe we don’t need things to calm down,” Alexander said. “I think historically that’s what happens: They do something, something happens, you give some small piece of something and everybody gets calm and they forget. I’m not sure how long it’s going to last. … This is the 2014 version of Freedom Summer, maybe.”

Michael McMillan, president and CEO of the Urban League of Metropolitan St. Louis, an advocacy group for African-Americans in the area, said he expects an “increased level of anger, rage, disgust and resentment that you have not seen yet” if Wilson doesn’t face charges. He said he hopes Brown’s death and the subsequent uproar will result in police being forced to wear cameras.

Much of the anger has also been focused on what are seen as over-the-top police tactics, with officers treating the Ferguson area like occupied territory. The military-style police gear employed to quell unrest provoked particular anger.

Walter Rice, 75, has been seen regularly confronting heavily armed officers wearing combat gear as he carries an enormous American flag. He was out on Thursday night outside of the Ferguson Market & Liquor, where Brown allegedly stole some cigarillos shortly before his death.

Rice told officers to stop using their military gear on the protesters. “I’m not going to stop talking,” he said. “You guys take this shit home, and I demand that. I demand that you take this stuff home. Otherwise, you’re going to see this old sergeant lay down here and die. I’m 75 years old now. I’ve been through worse shit than this. I will lay my life down, let you run over me if you want. I will die here. So just take this stuff home. Take it home. That’s all.”

“The protests will end when justice is served,” said Cerra Wilson, 28. She added that she’s been disappointed in the heavy-handed police response to the protests, which has included tear gas and dozens of arrests each night.

Still, getting people to agree on what they want — both short-term and long-term — isn’t easy.

On Wednesday night, a small circle of individuals formed around Iyanla Vanzant, a self-described “inspirational speaker” and host of a show on OWN.

“This is too dangerous. [Let’s have] 14 days of just peace while the leaders of the community, the elders of the community, begin to meet and create a plan for moving forward. Because it’s not going to stop here,” she said. Even if you get an indictment, you’ve got a trial. And even if you have a trial, it doesn’t mean you’re going to have a conviction. But what does that do for stop-and-frisk, for the lack of jobs? What is the plan?”

But that idea didn’t go over well with everyone.

“I ain’t pausing for 14 minutes,” muttered one man under his breath.

A man in the circle suggested going up and shaking hands with the police officers as a gesture of goodwill. That idea was widely booed. Another man said he wanted a better school system, but Vanzant said they needed a “clear ask.”

A group calling itself the “Justice for Michael Brown Leadership Coalition” distributed a list of demands Wednesday night, signed by a some local leaders who have been at the protests night after night. The coalition includes some local politicians, members of the New Black Panther Party, civil rights leaders and clergymen, but it’s not clear how much support they have from the larger community. The demands included the resignation of Ferguson’s mayor and police chief, an audit of municipalities that have a history of racial profiling and that Wilson be immediately fired from the police department.

The protests have already sparked greater organizing in other areas of St. Louis and nationally, taking the movement beyond West Florissant.

On Tuesday, protests erupted in St. Louis after an officer killed a black man just a few miles from where Brown was shot.

Jimmie Matthews, a resident of the area who has repeatedly run for office and described his age as “pretty near 70,” said he never wants the protests to end.

“You can still protest while you’re at home, when you write a letter, when you’re by yourself and stand up for yourself. You should always protest,” he said. “You should always be in opposition to injustice, unjust causes, racism, any kind of hatred, misleading, lying, setting people up, killings and all that. We have killings in our community quite frequently. We have people going to jail.”

The involvement of the federal government has heartened some community members, who don’t trust St. Louis County Prosecutor Bob McCulloch to do an impartial investigation. The Justice Department is doing its own investigation into Brown’s death and also looking for “broad patterns of civil rights violations” by the police in Ferguson.

President Barack Obama and Attorney General Eric Holder received loud cheers Sunday during a rally at a church just outside Ferguson, and Holder came to Ferguson Wednesday and met with community members.

“This is bigger than Mike Brown,” said De Andrea Nichols, 26, a social entrepreneur in St. Louis. “This is an issue that has been occurring regularly in our nation, and it took this death to make everyone go over the tipping point. In the future, we shouldn’t have to wait for something to happen to have our measures, our strategies, our tactics in place to prevent it.”