On August 13, 2014, the National Black Justice Coalition (NBJC) joined national LGBT Equality organizations to pen an open letter of solidarity in response to the tragic death of Michael Brown, an unarmed Black teenager who was shot and killed Saturday by a police officer in Ferguson, Missouri. Additional details surrounding the shooting are scarce, and the police officials have not provided information as to why the officer shot Brown, or why lethal force was used.

When communities experience fear, harassment and brutality simply because of who they are or how they look, we are failing as a nation. In light of the recent events in Missouri, it is clearer than ever that there is something profoundly wrong in our country.

The lesbian, gay, bisexual and transgender (LGBT) community cannot be silent at this moment, because LGBT people come from all races, creeds, faiths and backgrounds, and because all movements of equality are deeply connected. We are all part of the fabric of this nation and the promise of liberty and justice for all is yet to be fulfilled.

The LGBT community stands with the family of Michael Brown, who was gunned down in Ferguson, Missouri. We stand with the mothers and fathers of young Black men and women who fear for the safety of their children each time they leave their homes. We call on the national and local media to be responsible and steadfast in their coverage of this story and others like it–racialized killings that have marred this nation since the beginning of its history. We call on policy makers on all levels of American government not to shrink from action, and we are deeply grateful to Attorney General Eric Holder and the Department of Justice for their immediate commitment to a thorough investigation.

At this moment, we are inspired by the words of Dr. Martin Luther King, Jr.: “In the end, we will remember not the words of our enemies … but the silence of our friends.” 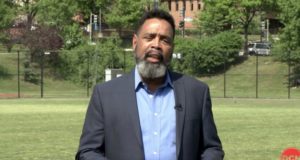