A new study suggests that aggressive policing likely has an adverse effect on the mental health of young men in New York City — particularly young men who are black.

The study, released Thursday by the American Journal of Public Health, appears to show higher rates of feelings of stress, anxiety and trauma in young men who experienced multiple or intrusive stop and frisk encounters with police than among young men who had fewer or no such encounters.

“Our findings suggest that proactive policing tactics have the potential to negatively impact the relationship between the community and police, as well as the mental health and well-being of community members,” Amanda Geller, a professor at New York University and lead author of the study, said in a statement.

Those who experienced the harshest and most intrusive police stops self-reported higher levels of trauma and stress, the study says, although even those who faced less intense encounters with police also reported symptoms.

“Most of the police encounters our respondents described didn’t include an arrest or incarceration, yet they still reported associated mental health symptoms,” Geller said in the statement. “This tells us that even the low levels of interaction that many urban residents experience may have consequences.”

Geller told MSNBC that feelings of trauma and and anxiety could be related to other factors besides police stops, such as poverty, but that the correlation between intrusive stops and high levels of anxiety should raise serious questions about how communities are policed.

The results of the study also suggested a higher prevalence of post-traumatic stress disorder symptoms among black respondents who’d had encounters with the police.

From 2004 to 2013, NYPD officers stopped New Yorkers nearly 4 million times. About 87 percent of the people stopped were either black or Latino, and roughly the same percentage were totally innocent of any crime.

Last year, a federal judge ruled the NYPD’s use of stop and frisk unconstitutional, saying the practice amounted to racial profiling. The judge ordered a federal monitor to oversee the police department, along with the implementation of other remedies. That decision, however, has been tied up in the courts, in part due to objections from the city’s police unions.

Mayor Bill de Blasio, who was elected in a landslide last year, spoke often as a candidate of reforming the NYPD and overhauling its use of stop and frisk in particular. There have been only 27,527 stops so far this year, a dramatic drop from the nearly 700,000 stops recorded in 2011.

This isn’t the first time research has indicated a heavy psychological toll associated with simply being black in America. Previous studies have suggested a link between everyday racial discrimination and a host of both mental and physical health problems. 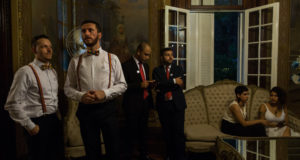