Anatomy of an HIV Negative Activist 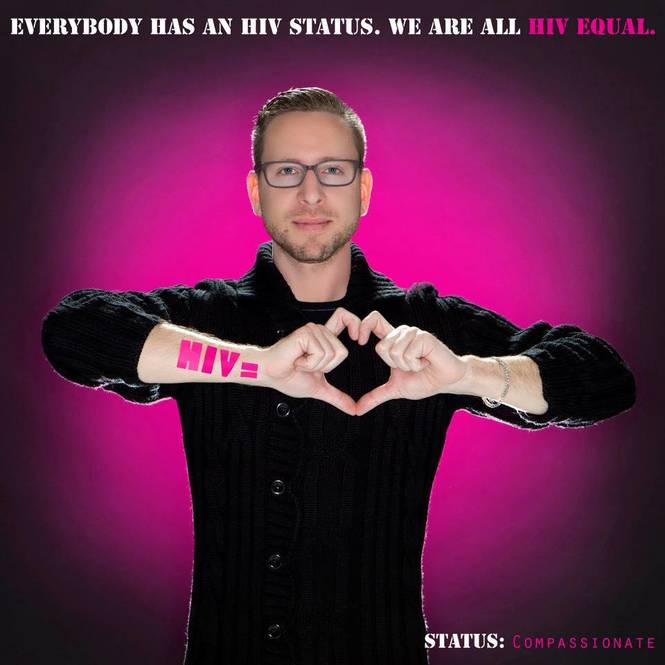 I was never the cool kid when I was younger. I was either the personification of a homophobic slur or the lonely, pensive guy who everyone either loved or resented. But since I graduated high school more than a decade ago, I know that there has been a vast improvement of my own self-image. As a soon-to-be 32 year old, out man, I have known for some time now to stop caring about fitting in with cliques or trying too hard to be cool. I even stopped doing things to please others. So when I was asked to become a part of the HIV Equal anti-stigma social media campaign, it didn’t matter to me what people assumed of my HIV status.

Some people assume that I am HIV positive because of my dedication to the cause. Others say that I have no reason to be a part of it because I don’t understand what living with HIV is like. But there are so many people, conversely, who come up to me, who write to me or who call me to tell me that they appreciate the work that is being done by the HIV Equal team. None of these people ask about my status, and seemingly none of them care. And that is the point of the campaign. To end the stigma against HIV, and to know that regardless of an HIV status, whether positive or negative, that we are all in this battle together. It’s wrong to assume anything of anyone; but it’s right to accept people – no matter their connection to a cause – who give a damn about something so much that they’re working to help make a change in the world about it!

Real people are fighting a real-world virus of disputed origins. There is no cure, but there are manageable treatments for it. And the purpose of treatment is to keep people alive. What better cause to stand behind than that? To help people who are helping themselves live fuller, better lives; to end stigma so that millions of people around the world can recognize their value despite their HIV diagnosis.

As a participant of the HIV Equal campaign, you have to choose a status word that describes who you are as an individual. My word? Compassionate. I believe that people just want someone to talk to and to share their experiences with. They’re seeking compassion, not sympathy or pity. And I believe that through my own experiences in life, that I have learned to first be compassionate with myself and then to fully translate that compassion into my interactions with others.

Friends and strangers alike have come out to me as HIV positive. I’ve been in a serodiscordant relationship and gone on dates with HIV positive guys. Several of my friends have divulged personal fears surrounding the very idea of contracting the virus, though I’ve helped to quell their concerns. Regardless, I have approached each situation with the same level of compassion that I do with anything in my life, and HIV Equal has helped me to reinforce that quality of mine on a day-to-day basis.

Another important aspect to this campaign, which is a huge factor in my involvement, is to end the fear and stigma surrounding HIV testing. I remember the first time I went for an HIV test. I was so naive and uneducated about the virus that I panicked so much thinking that I was perhaps already positive. I remember sitting there at the clinic, remembering all of my sexual experiences and wondering how many of them would have been “worth it.” Naive, immature, but incredibly human were my thoughts.

It’s quite comical to look back on now, but it’s something that everyone, at some point or another, experiences in their life. And it’s because of this reality that in addition to all of the other work I do with the HIV Equal campaign that I’m also a certified tester for HIV. I sit with individuals at the HIV Equal testing events and I try my best to make everyone feel comfortable, especially if it’s their first time. I get to hear the diversity of people’s stories, and I learn a little something about everyone involved. It’s been a long time since that first HIV test, and there have been many tests since then. But I’m happy to now know more about HIV, and the difference between the virus and the medical diagnosis of AIDS, that I can sit comfortably while taking a test. And I hope to bring that calm attitude with me to all of the individuals who I sit with at testing events.

Over the years I’ve also received lessons specific to terms related to HIV. For instance, the term “disease” in reference to HIV is only used by doctors, clinicians and other medical professionals. Those who are HIV positive find the term “disease” to be offensive. While HIV is clinically referred to as a disease, socially it is known as a virus that can be managed to allow for a normal life expectancy. Also, the term “clean,” used so popularly among youth who are sexually active, is incorrect. You are not “dirty” if you have an HIV positive diagnosis; therefore it is uncouth, in almost any manner of speaking, to use the term “clean” if you remain HIV negative and/or free of any sexually transmitted infections (STIs).

HIV affects people from all walks of life, and in different ways. For some, it’s a lifelong management of a virus, and for others like me it becomes something to understand and to stop fearing. The people in my life who are affected by HIV know that they can confide in me and that I will be there for them just as I would be for any one of my friends. So when anyone asks why an HIV negative person is so determined to fight the stigma and to attach themselves to a campaign like HIV Equal, it’s compassion that drives me along with the understanding that we are all valuable people. So, no matter what anyone might think about my involvement with HIV Equal, the only HIV status I will continue to identify with is: compassionate.