No longer ‘voiceless,’ Louisiana felons regain the right to vote

Forty-year-old Kiana Calloway doesn’t know what it feels like to cast a ballot.

He does know, however, what it’s like to be wrongfully convicted of first-degree murder at 16 years old, to be tried as an adult, and to serve 17 years in prison. He also knows what it feels like to live under strict parole for seven years, with a decade still to go. And as of Thursday, he knows what it feels like to stand in the Louisiana State Capitol besides dozens of people with criminal records as the governor signed a bill restoring voting rights to thousands of people like him.

“The energy was crazy,” Calloway told ThinkProgress. “When he introduced the bill, the whole room just roared. It was actually like a Pelicans playoff game.”

On Thursday, Louisiana Gov. John Bel Edwards (D) signed into law a bill that will restore voting rights to people with felony records who are on probation or parole, as long as they have been out of prison for five years. Both chambers of the state’s GOP-controlled legislature passed House Bill 265 with bipartisan support in May.

Roughly 70,000 Louisiana citizens are currently on probation or parole for felony crimes. According to the Department of Corrections, roughly 2,200 of them will be affected by this legislation when it takes effect March 1, 2019. Over the next few years, potentially tens of thousands additional offenders could also see their rights restored. [Read More…] 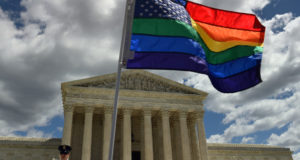